The lesser yellowlegs (Tringa flavipes) is a medium-sized shorebird. The genus name Tringa is the New Latin name given to the green sandpiper by Aldrovandus in 1599 based on Ancient Greek trungas, a thrush-sized, white-rumped, tail-bobbing wading bird mentioned by Aristotle. The specific flavipes is from Latin flavus, "yellow", and pes, "foot".

This species is similar in appearance to the larger greater yellowlegs, although it is more closely related to the much larger willet; the fine, clear and dense pattern of the neck shown in breeding plumage indicates these species' actual relationships.

A medium-large shorebird, the lesser yellowlegs measures 27 cm (11 in). The legs are yellow. Compared to the greater yellowlegs, the bill is shorter (visually about the same length as the head), slim, straight, and uniformly dark. The breast is streaked and the flanks are finely marked with short bars.

Their breeding habitat is clearings near ponds in the boreal forest region from Alaska to Quebec. They nest on the ground, usually in open dry locations.

They migrate to the Gulf coast of the United States and south to South America.

This species is a regular vagrant to western Europe, and the odd bird has wintered in Great Britain.

These birds forage in shallow water, sometimes using their bill to stir up the water. They mainly eat insects, small fish and crustaceans.

The call of this bird is softer than that of the greater yellowlegs. 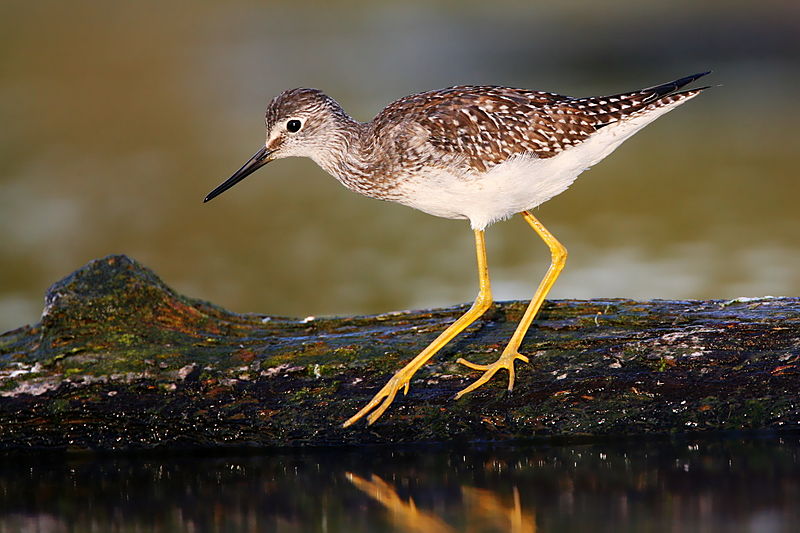