The goldcrest (Regulus regulus) is a very small passerine bird in the kinglet family. Its colourful golden crest feathers gives rise to its English and scientific names, and possibly to it being called the "king of the birds" in European folklore. Several subspecies are recognised across the very large distribution range that includes much of Eurasia and the islands of Macaronesia. Birds from the north and east of its breeding range migrate to winter further south.

This kinglet has greenish upper-parts, whitish under-parts, and has two white wingbars. It has a plain face contrasting black irises and a bright head crest, orange and yellow in the male and yellow in the female, which is displayed during breeding. It superficially resembles the firecrest, which largely shares its European range, but the latter's bronze shoulders and strong face pattern are distinctive. The song is a repetition of high thin notes, slightly higher-pitched than those of its relative. Birds on the Canary Islands are now separated into two subspecies of the goldcrest, but were formerly considered to be a subspecies of the common firecrest or a separate species, Regulus teneriffae.

The goldcrest breeds in coniferous woodland and gardens, building its compact, three-layered nest on a tree branch. Ten to twelve eggs are incubated by the female alone, and the chicks are fed by both parents; second broods are common. This kinglet is constantly on the move as it searches for insects to eat, and in winter it is often found with flocks of tits. It may be killed by birds of prey or carry parasites, but its large range and population mean that it is not considered to present any significant conservation concerns. 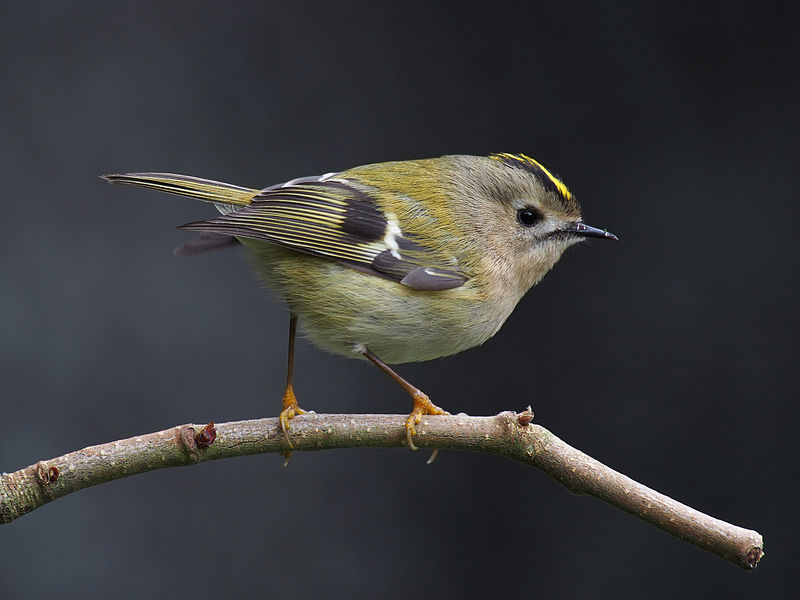