The red-billed chough, Cornish chough or simply chough (/ˈtʃʌf/ CHUFF) (Pyrrhocorax pyrrhocorax), is a bird in the crow family, one of only two species in the genus Pyrrhocorax. Its eight subspecies breed on mountains and coastal cliffs from the western coasts of Ireland and Britain east through southern Europe and North Africa to Central Asia, India and China.

This bird has glossy black plumage, a long curved red bill, red legs, and a loud, ringing call. It has a buoyant acrobatic flight with widely spread primaries. The red-billed chough pairs for life and displays fidelity to its breeding site, which is usually a cave or crevice in a cliff face. It builds a wool-lined stick nest and lays three eggs. It feeds, often in flocks, on short grazed grassland, taking mainly invertebrate prey.

Although it is subject to predation and parasitism, the main threat to this species is changes in agricultural practices, which have led to population decline, some local extirpation, and range fragmentation in Europe; however, it is not threatened globally. The red-billed chough, which derived its common name from the jackdaw, was formerly associated with fire-raising, and has links with Saint Thomas Becket and Cornwall. The red-billed chough has been depicted on postage stamps of a few countries, including the Isle of Man, with four different stamps, and The Gambia, where the bird does not occur. 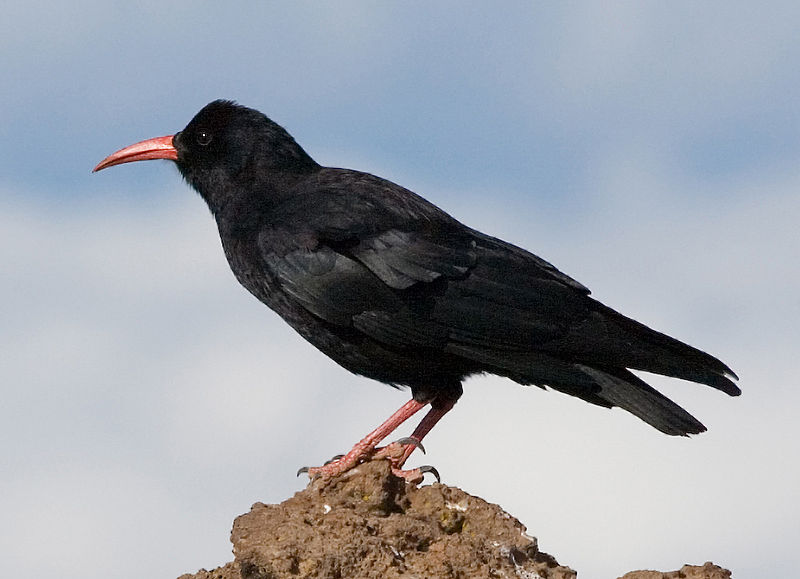