The rose-ringed parakeet (Psittacula krameri), also known as the ring-necked parakeet, is a gregarious tropical Afro-Asian parakeet species that has an extremely large range.

The rose-ringed parakeet is sexually dimorphic. The adult male sports a red or black neck ring and the hen and immature birds of both sexes either show no neck rings, or display shadow-like pale to dark grey neck rings. Both sexes have a distinctive green colour. Rose-ringed parakeets measure on average 40 cm (16 in) in length, including the tail feathers, a large portion of their total length. Their average single-wing length is about 15–17.5 cm (5.9–6.9 in). In the wild, this is a noisy species with an unmistakable squawking call. It is herbivorous and not migratory.

One of the few parrot species that have successfully adapted to living in disturbed habitats, it has withstood the onslaught of urbanisation and deforestation. As a popular pet species, escaped birds have colonised a number of cities around the world. Since the population appears to be increasing, the species was evaluated as being of least concern by the IUCN in 2012, but its popularity as a pet and unpopularity with farmers have both reduced its numbers in some parts of its native range.

The genus name Psittacula is a diminutive of Latin psittacus, "parrot", and the specific krameri commemorates the Austrian naturalist Wilhelm Heinrich Kramer. 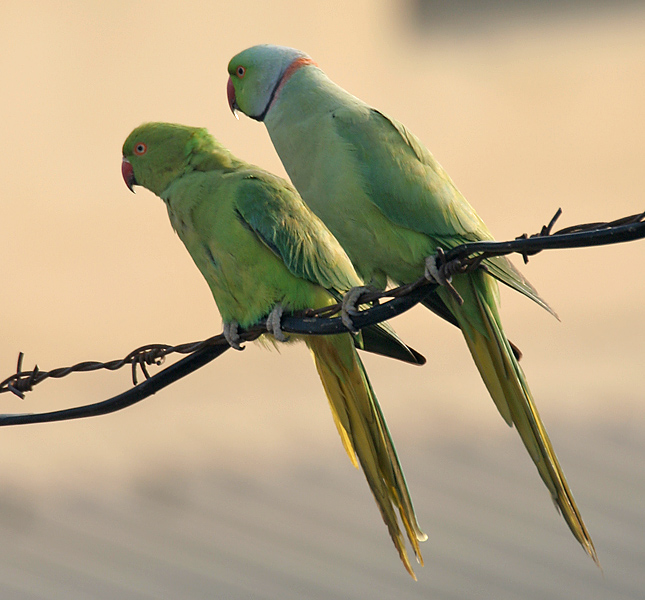