The Montezuma oropendola (Psarocolius montezuma) is a New World tropical icterid bird. It is a resident breeder in the Caribbean coastal lowlands from southeastern Mexico to central Panama, but is absent from El Salvador and southern Guatemala. It also occurs on the Pacific slope of Nicaragua and Honduras and northwestern Costa Rica. It is among the oropendola species sometimes separated in the genus Gymnostinops. The English and scientific names of this species commemorate the Aztec emperor Moctezuma II.

Adult males are mainly chestnut with a blackish head and rump, and a tail which is bright yellow apart from two dark central feathers. There is a bare blue cheek patch and a pink wattle, the iris is brown, and the long bill is black at the base with a red tip. Females are similar, but smaller than males with a smaller wattle. Young birds are duller than adults and have a paler and less demarcated bill. No subspecies are currently recognized.

The "unforgettable" song of the male Montezuma oropendola is given during the bowing display, and consists of a conversational bubbling followed by loud gurgles, tic-tic-glik-glak-GLUUuuuuu. Both sexes have loud cack and crrrk calls.

Although the chestnut-headed oropendola shares much of this species's range, it is smaller, mainly black with a chestnut head (instead of mainly chestnut with a blackish head), and lacks coloured facial patches, so the two oropendolas are unlikely to be confused.

The Montezuma oropendola is a quite common bird in parts of its range, often seen in small or larger flocks foraging in trees for small vertebrates, large insects, nectar, and fruit, including bananas, Cecropia spikes, gumbo-limbo (Bursera simaruba) and Trophis racemosa (Moraceae). Outside the breeding season, this species is quite mobile, with some seasonal movements.

The Montezuma oropendola inhabits forest canopy, edges and old plantations. It is a colonial breeder which builds a hanging woven nest of fibres and vines, 60–180 cm (24–71 in) long, high in a tree. Each colony has a dominant male, which mates with most of the females following an elaborate bowing display. The female lays two dark-spotted white or buff eggs which hatch in 15 days; the young fledge in 30. There are typically about 30 nests in a colony, but up to 172 have been recorded. 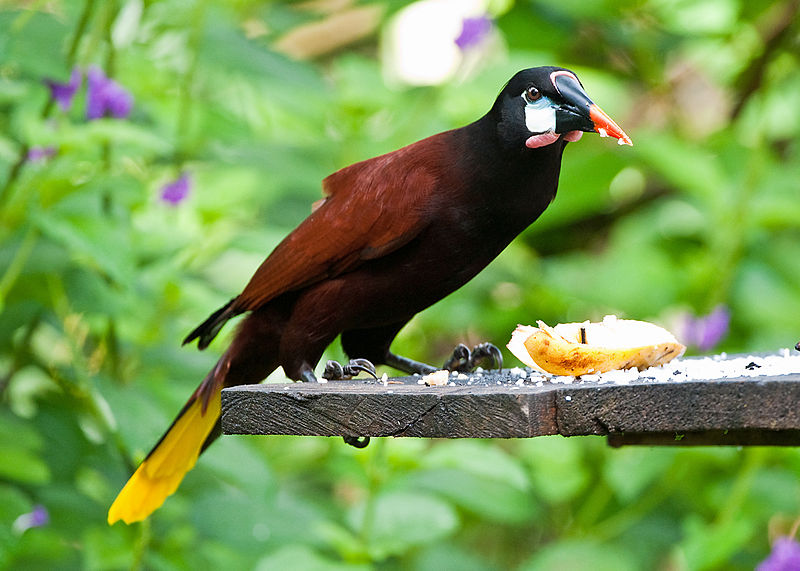