The red-billed pigeon (Patagioenas flavirostris) is a relatively large pigeon which breeds from southern Texas, United States, and northwestern Mexico south to Costa Rica. It belongs to a clade of Patagioenas which generally lack iridescent display plumage, except some vestiges in the pale-vented pigeon.

It is found in open country with some trees, large clearings and cultivation in lowlands and middle altitudes to 2,100 m (6,900 ft). It builds a rudimentary platform nest out of twigs in a tree about 4–25 m (13–82 ft) above the ground, usually on a horizontal branch or on a palm crown, and lays one white egg.

The red-billed pigeon is mid or large-sized pigeon, at 30–37 cm (12–15 in) in length and a weight of 230–425 g (8.1–15.0 oz). It is mainly wine-purple, becoming browner on the back, and with a grey tail, lower belly and flight feathers. The bill is white with a red base, and the legs and eyes are red. Juvenile birds are duller than adults and the plumage is brown-tinged.

It is normally seen alone or in pairs and rarely forms flocks. It feeds on the ground, seeking acorns, berries and buds.

It is often thought to be brown it is actually a dark shade of maroon.

The red-billed pigeon has a loud kuk c'c'coooo call that is given in rows; the initial short kuk is characteristic for this group of Patagioenas. 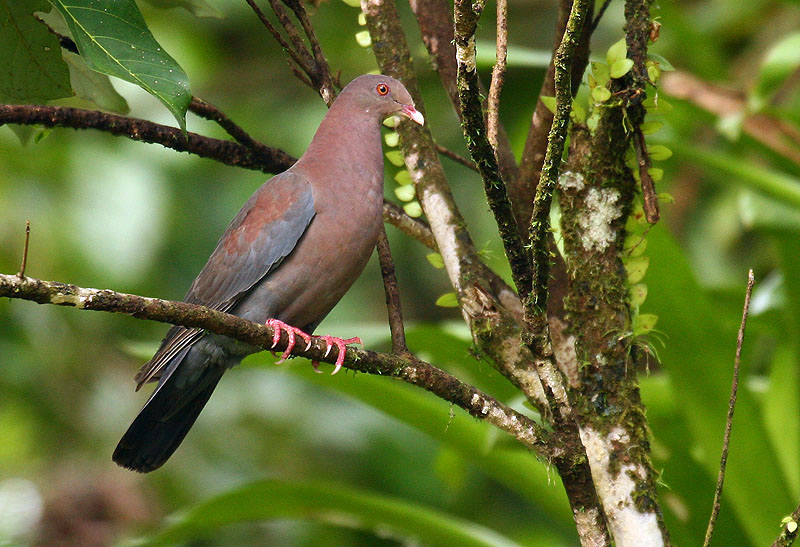