The brown hawk-owl (Ninox scutulata), also known as the brown boobook, is an owl which is a resident breeder in south Asia from India and Sri Lanka east to western Indonesia and south China.

This species is a part of the larger grouping of owls known as typical owls, Strigidae, which contains most species of owl. The other grouping is the barn owls, Tytonidae.

The brown hawk-owl is a resident breeder in most of tropical south Asia from the Middle East to south China. Its habitat is well-wooded country and forest. It lays three to five eggs in a tree hole.

The brown hawk-owl is a medium-sized (32 cm) owl with a hawk-like shape due to its long tail and lack of a distinct facial disk. The upperparts are dark brown, with a barred tail. The underparts are whitish with reddish-brown streaking, although the subspecies found in the Andaman Islands has dark brown underparts. The tail is barred. The eyes are large and yellow. Sexes are similar.

This species is very nocturnal but it can often be located by the small birds that mob it while it is roosting in a tree. It feeds mainly on large insects, frogs, lizards, small birds, and mice. The call is a repeated low soft, musical oo-uk ...ooo-uk... which may be heard at dusk and dawn. This owl is quite common in towns and cities like Colombo, Sri Lanka as well as suburban areas close to buildings.

There is only one record of the brown hawk-owl in the western hemisphere, an individual photographed on St. Paul Island, Alaska, on August 27, 2007. 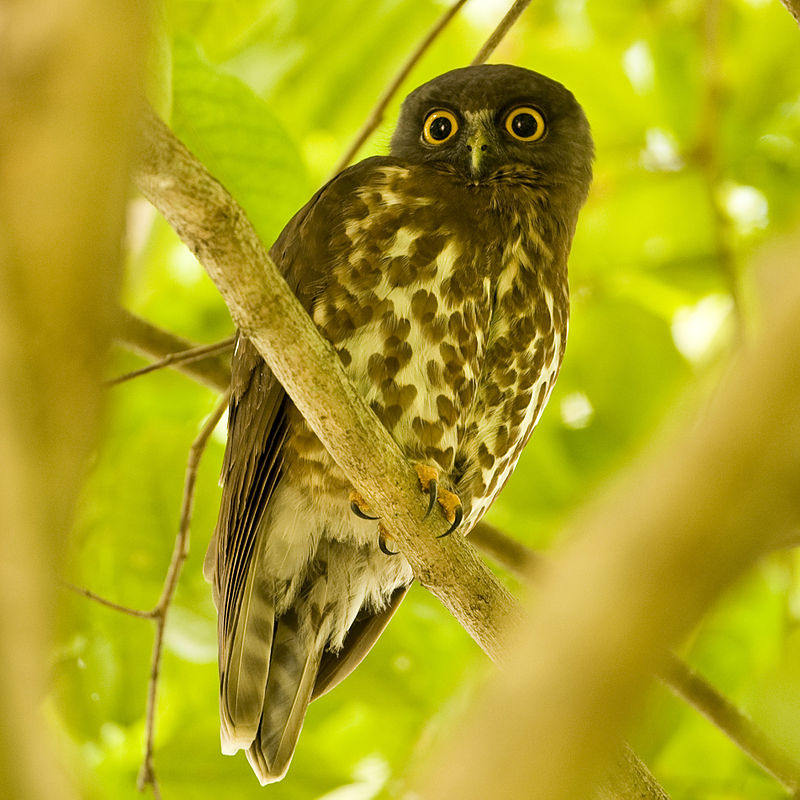