The tropical mockingbird (Mimus gilvus) is a resident breeding bird from southern Mexico south to northern Brazil, and in the Lesser Antilles and other Caribbean islands. The birds in Panama and Trinidad may have been introduced. The northern mockingbird (M. polyglottos) is its closest living relative, but the critically endangered Socorro mockingbird (M. graysoni) is also much closer to these two than previously believed .

Adults are 25 cm (9.8 in) long and weigh 54 g (1.9 oz). They are grey on the head and upper parts with yellow eyes, a white eye stripe and dark patch through the eye. The underparts are off-white and the wings are blackish with two white wing bars and white edges to the flight feathers. They have a long dark tail with white feather tips, a slim black bill with a slight downward curve, and long dark legs.

The sexes are alike, but immature birds are duller and browner. M. g. tobagensis, found only on Trinidad and Tobago, has darker grey upper parts and more extensive white on the wing coverts and tail than the mainland forms.

This bird has a varied and musical song, huskier than that of northern mockingbird, and may imitate the songs of neighbouring Tropical Mockingbirds, but rarely those of other birds. It will sometimes sing through the night.

This mockingbird is common in most open habitats, including human habitation. Tropical mockingbirds forage on the ground or in vegetation or fly down from a perch to capture invertebrates. They mainly eat insects and some berries. These fearless birds will also take food off unattended plates or tables. While foraging they will frequently spread their wings in a peculiar two-step motion, flashing the white wing linings, and then fold them again.

It builds a twig nest and the normal clutch is three greyish-green eggs. Incubation, by the female alone, is 13–15 days, with slightly longer again to fledging. This bird aggressively defends its nest against other birds and animals, including large iguanas, dogs and mongooses. 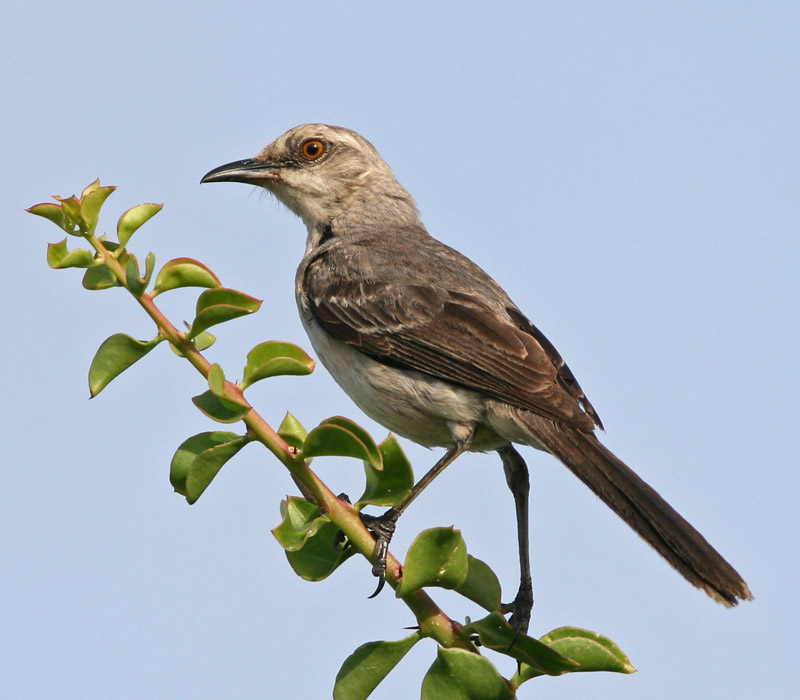