Hoffmann's woodpecker, Melanerpes hoffmannii, is a resident breeding bird from southern Honduras south to Costa Rica. It is a common species on the Pacific slopes, locally as high as 2,150 m (7,050 ft). It is expanding on the Caribbean slope, aided by deforestation. This is further facilitated by its tendency to wander about outside the breeding season.

The adult Hoffmann's woodpecker is 18 cm (7.1 in) long and weighs 68 g (2.4 oz). Its upperparts and wings are neatly barred with black and white, and it has a white rump. The underparts are pale buff-grey with a yellow central belly patch. The male has a white forehead, red crown, and yellow nape. The female has a white crown and forehead and reduced yellow nape. Young birds are duller, have less white above and less yellow on the belly.

This common and conspicuous species gives a rattling wicka-wicka-wicka call and both sexes drum on territory.

The golden-fronted woodpecker replaces it to the north. It is very similar, but has a yellow forehead; also, the calls are very different. The two species hybridize at the Rio Pespire in Honduras.

This woodpecker occurs in deciduous open woodland, second growth, shade trees and hedges, but avoids dense forest. It feeds on insects, often extracted from decaying wood, but will take substantial quantities of fruit and nectar and will mob the ferruginous pygmy owl.

It nests in an unlined hole up to 9 m (30 ft) high in a dead tree. The clutch is two or three glossy white eggs, incubated by both sexes.

This woodpecker is named for the German naturalist Karl Hoffmann. 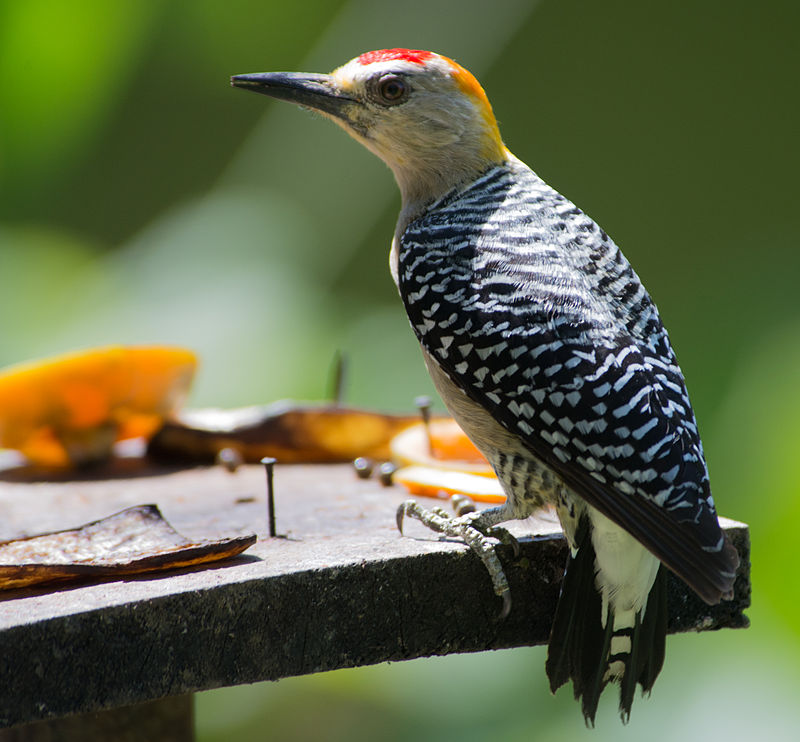