The Iceland gull (Larus glaucoides) is a medium size gull which breeds in the Arctic regions of Canada and Greenland, but not Iceland, where it is only seen in the winter. The genus name is from Latin Larus which appears to have referred to a gull or other large seabird. The specific glaucoides denotes its resemblance to Larus glaucus, a synonym of Larus hyperboreus, the glaucous gull; -oides is Ancient Greek and means "resembling".

It is migratory, wintering from in the North Atlantic as far south as the British Isles and northernmost states of the eastern United States, as well as in the interior of North America as far west as the western Great Lakes. It is much scarcer in Europe than the similar glaucous gull.

This species breeds colonially or singly on coasts and cliffs, making a nest lined with grass, moss, or seaweed on the ground or cliff. Normally 2–3 light brown eggs are laid.

The nominate subspecies, L. g. glaucoides, is very pale in all plumages, with absolutely no melanin in the tips of the primaries in adult plumage. Adults are pale grey above, with a yellowish-green bill. Immatures are very pale grey; the bill is more extensively dark than with glaucous gull, and lacks pink.

The call is a "laughing" cry like herring gull, but higher pitched.

Like most Larus gulls, these are omnivores, eating fish, molluscs, offal, scraps, and eggs. They forage while flying, picking up food at or just below the water's surface, also feeds while walking or swimming. Their scavenging habits lead them to frequent garbage dumps, sewage outlets, and places where fish are cleaned. 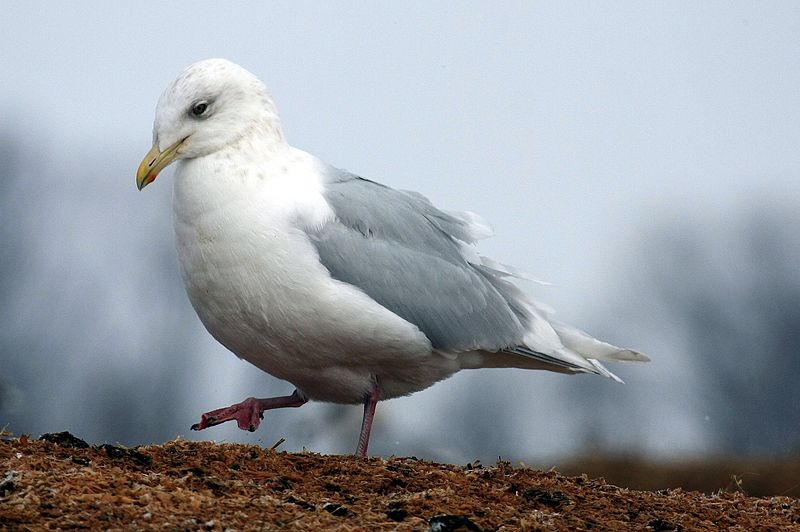