The narcissus flycatcher (Ficedula narcissina) is a passerine bird in the Old World flycatcher family. It is native to east Asia, from Sakhalin to the north, through Japan across through Korea, mainland China, and Taiwan, wintering in southeast Asia, including the Philippines and Borneo. It is highly migratory, and has been found as a vagrant from Australia in the south to Alaska in the north [1].

Narcissus flycatcher males are very distinctive in full breeding plumage, having a black crown and mantle, a bright orange throat with paler chest and underparts, an orange-yellow eyebrow, black wings with a white wing patch, an orange-yellow rump, and a black tail. Non-breeding males have varying levels of yellow. Females are completely dissimilar, with generally buff-brown coloration, with rusty-colored wings, and a two-toned eyering.

This species primarily feeds on insects, and lives in deciduous woodlands. Breeding males sing in repeated melodious whistles. The green-backed flycatcher was formerly considered a subspecies.

There are several subspecies, largely determined by plumage and range variations, at least of which has been split off as separate species.

F. n. narcissina, the nominate race, found from Sakhalin south to the Philippines

F. n. owstoni, a short-range migrant based in the Ryukyu Islands, breeding males have an olive-green crown and mantle instead of black

The name of the bird is a reference to the yellow color of many varieties of the narcissus flower. 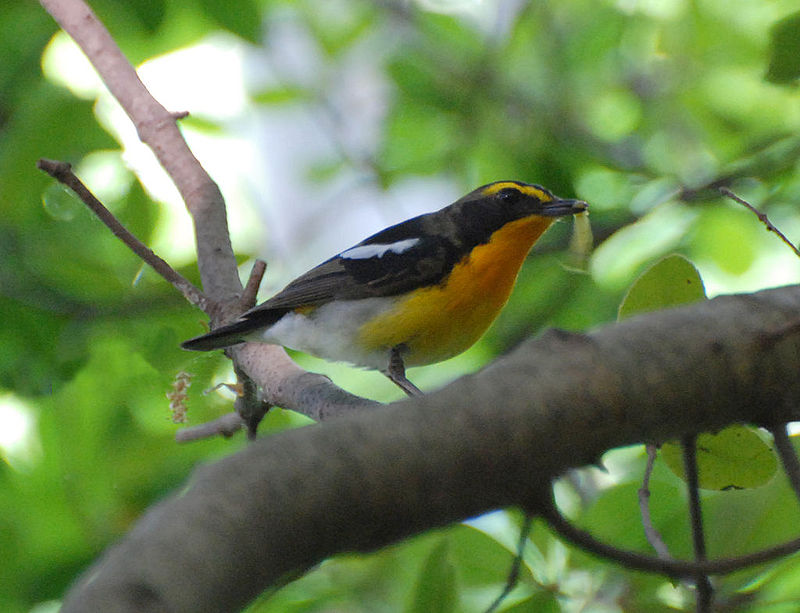