The peregrine falcon (Falco peregrinus), also known as the peregrine, and historically as the duck hawk in North America, is a widespread bird of prey in the family Falconidae. A large, crow-sized falcon, it has a blue-grey back, barred white underparts, and a black head. As is typical of bird-eating raptors, peregrine falcons are sexually dimorphic, females being considerably larger than males. The peregrine is renowned for its speed, reaching over 320 km/h (200 mph) during its characteristic hunting stoop (high speed dive), making it the fastest member of the animal kingdom. According to a National Geographic TV programme, the highest measured speed of a peregrine falcon is 389 km/h (242 mph).

The peregrine's breeding range includes land regions from the Arctic tundra to the tropics. It can be found nearly everywhere on Earth, except extreme polar regions, very high mountains, and most tropical rainforests; the only major ice-free landmass from which it is entirely absent is New Zealand. This makes it the world's most widespread raptor and one of the most widely found bird species. In fact, the only land-based bird species found over a larger geographic area is not always naturally occurring but one widely introduced by humans, the rock pigeon, which in turn now supports many peregrine populations as a prey species. Both the English and scientific names of this species mean "wandering falcon", referring to the migratory habits of many northern populations. Experts recognize 17 to 19 subspecies which vary in appearance and range; there is disagreement over whether the distinctive Barbary falcon is represented by two subspecies of Falco peregrinus, or is a separate species, F. pelegrinoides. The two species' divergence is relatively recent, during the time of the last ice age, therefore the genetic differential between them (and also the difference in their appearance) is relatively small. It has been determined that they are only approximately 0.6–0.8% genetically differentiated.

While its diet consists almost exclusively of medium-sized birds, the peregrine will occasionally hunt small mammals, small reptiles, or even insects. Reaching sexual maturity at one year, it mates for life and nests in a scrape, normally on cliff edges or, in recent times, on tall human-made structures. The peregrine falcon became an endangered species in many areas because of the widespread use of certain pesticides, especially DDT. Since the ban on DDT from the early 1970s, populations have recovered, supported by large-scale protection of nesting places and releases to the wild.

The peregrine falcon is a well respected falconry bird due to its strong hunting ability, high trainability, versatility, and in recent years availability via captive breeding. It is effective on most game bird species from small to large. 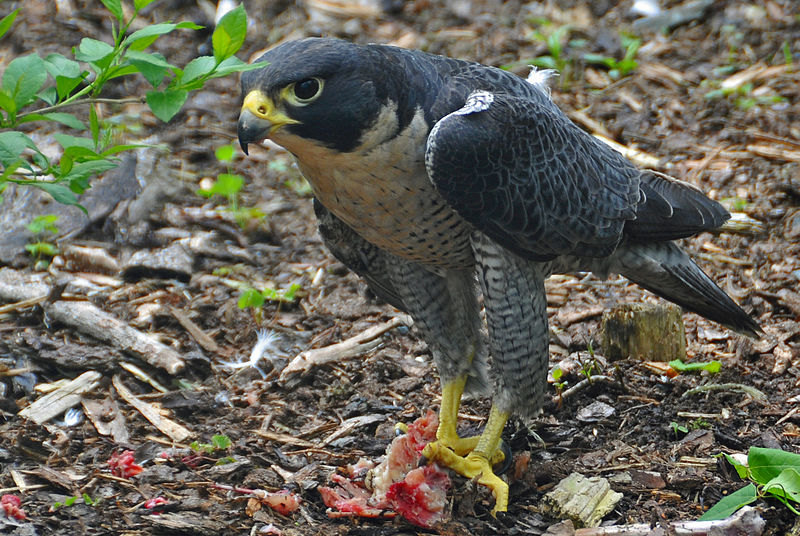