The American white ibis (Eudocimus albus) is a species of bird in the ibis family, Threskiornithidae. It is found from North Carolina via the Gulf Coast of the United States south through most of the coastal New World tropics. This particular ibis is a medium-sized bird with an overall white plumage, bright red-orange down-curved bill and long legs, and black wing tips that are usually only visible in flight. Males are larger and have longer bills than females. The breeding range runs along the Gulf and Atlantic Coast, and the coasts of Mexico and Central America. Outside the breeding period, the range extends further inland in North America and also includes the Caribbean. It is also found along the northwestern South American coastline in Colombia and Venezuela. Populations in central Venezuela overlap and interbreed with the scarlet ibis. The two have been classified by some authorities as a single species.

Their diet consists primarily of small aquatic prey, such as insects and small fishes. Crayfish are its preferred food in most regions, but it can adjust its diet according to the habitat and prey abundance. Its main foraging behavior is probing with its beak at the bottom of shallow water to feel for and capture its prey. It does not see the prey.

During the breeding season, the American white ibis gathers in huge colonies near water. Pairs are predominantly monogamous and both parents care for the young, although males tend to engage in extra-pair copulation with other females to increase their reproductive success. Males have also been found to pirate food from unmated females and juveniles during the breeding season. 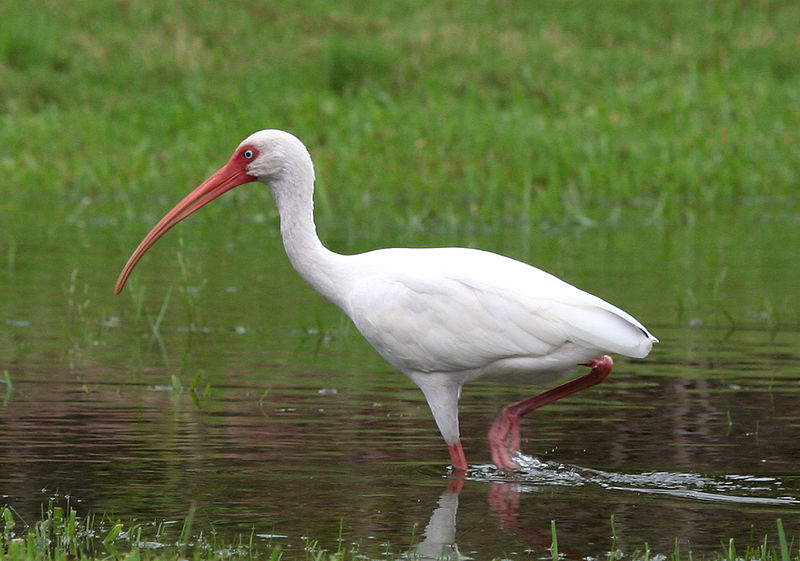