The corn crake, corncrake or landrail (Crex crex) is a bird in the rail family. It breeds in Europe and Asia as far east as western China, and migrates to Africa for the northern hemisphere's winter. It is a medium-sized crake with buff- or grey-streaked brownish-black upperparts, chestnut markings on the wings, and blue-grey underparts with rust-coloured and white bars on the flanks and undertail. The strong bill is flesh-toned, the iris is pale brown, and the legs and feet are pale grey. Juveniles are similar in plumage to adults, and downy chicks are black, as with all rails. There are no subspecies, although individuals from the east of the breeding range tend to be slightly paler than their western counterparts. The male's call is a loud krek krek, from which the scientific name is derived. The corn crake is larger than its closest relative, the African crake, which shares its wintering range; that species is also darker-plumaged, and has a plainer face.

The corn crake's breeding habitat is grassland, particularly hayfields, and it uses similar environments on the wintering grounds. This secretive species builds a nest of grass leaves in a hollow in the ground and lays 6–14 cream-coloured eggs which are covered with rufous blotches. These hatch in 19–20 days, and the black precocial chicks fledge after about five weeks. This crake is in steep decline across much of its former breeding range because modern farming practices often destroy nests before breeding is completed. The corn crake is omnivorous but mainly feeds on invertebrates, the occasional small frog or mammal, and plant material including grass seed and cereal grain. Natural threats include introduced and feral mammals, large birds, various parasites and diseases.

Although numbers have declined steeply in western Europe, this bird is classed as least concern on the IUCN Red List because of its huge range and large, apparently stable, populations in Russia and Kazakhstan. Numbers in western China are more significant than previously thought, and conservation measures have facilitated an increased population in some countries which had suffered the greatest losses. Despite its elusive nature, the loud call has ensured the corn crake has been noted in literature, and garnered a range of local and dialect names. 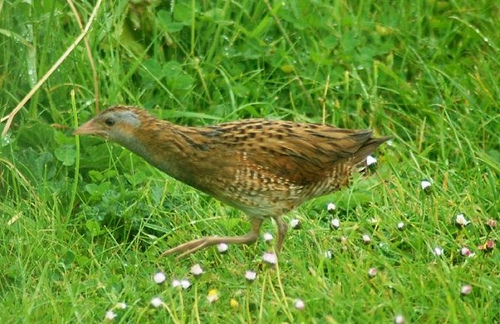