The black vulture (Coragyps atratus) also known as the American black vulture, is a bird in the New World vulture family whose range extends from the southeastern United States to Central Chile and Uruguay in South America. Although a common and widespread species, it has a somewhat more restricted distribution than its compatriot, the turkey vulture, which breeds well into Canada and south to Tierra del Fuego. Despite the similar name and appearance, this species is unrelated to the Eurasian black vulture. The latter species is an Old World vulture in the family Accipitridae (which includes eagles, hawks, kites and harriers), whereas the American species is a New World vulture. It is the only extant member of the genus Coragyps, which is in the family Cathartidae. It inhabits relatively open areas which provide scattered forests or shrublands. With a wingspan of 1.5 m (4.9 ft), the black vulture is a large bird though relatively small for a vulture. It has black plumage, a featherless, grayish-black head and neck, and a short, hooked beak.

The black vulture is a scavenger and feeds on carrion, but will also eat eggs or kill newborn animals. In areas populated by humans, it also feeds at garbage dumps. It finds its meals either by using its keen eyesight or by following other (New World) vultures, which possess a keen sense of smell. Lacking a syrinx—the vocal organ of birds—its only vocalizations are grunts or low hisses. It lays its eggs in caves or hollow trees or on the bare ground, and generally raises two chicks each year, which it feeds by regurgitation. In the United States, the vulture receives legal protection under the Migratory Bird Treaty Act of 1918. This vulture also appeared in Mayan codices. 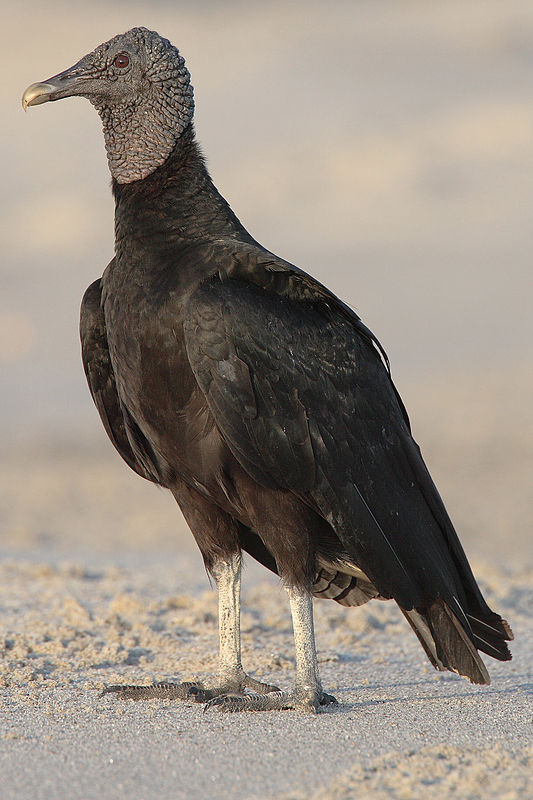