The olive-backed sunbird (Cinnyris jugularis), also known as the yellow-bellied sunbird, is a species of sunbird found from Southern Asia to Australia.

Common names for this bird include "tamsi" in the Philippines and "kelicap" in Malaysia.

The sunbirds are a group of very small Old World passerine birds which feed largely on nectar, although they will also take insects, especially when feeding young. Their flight is fast and direct on their short wings. Most species can take nectar by hovering, but usually perch to feed most of the time.

The olive-backed sunbird is common across southern China to the Philippines and Malaysia down to northeast Australia. They are small songbirds, at most 12 cm long. In most subspecies, the underparts of both male and female are bright yellow, the backs are a dull brown colour. The forehead, throat and upper breast of the adult male is a dark, metallic blue-black. In the Philippines the males of some subspecies have an orange band on the chest, in Wallacea and northern New Guinea some subspecies have most of the underparts blackish, and in southern China and adjacent parts of Vietnam most of the underparts of the male are greyish-white.

Originally from mangrove habitat, the olive-backed sunbird has adapted well to humans, and is now common even in fairly densely populated areas, even forming their nests in human dwellings.

The birds mate between the months of April and August in the Northern Hemisphere, and between August and January in the Southern Hemisphere. Both the male and the female assist in building the nest which is flask-shaped, with an overhanging porch at the entrance, and a trail of hanging material at the bottom end.

After building the nest, the birds abandon the nest for about a week before the female returns to lay one or two greenish-blue eggs. The eggs take a further week to hatch. The female may leave the nest for short periods during the day during incubation. After the chicks have hatched, both male and female assist in the care of the young, which leave the nest about two or three weeks later. 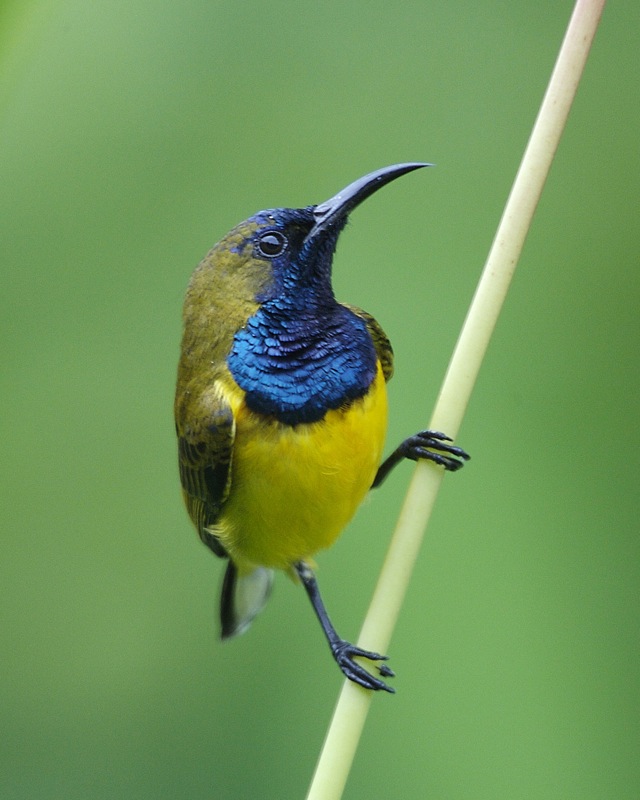