The long-toed stint, Calidris subminuta, is a small wader. The genus name is from Ancient Greek kalidris or skalidris, a term used by Aristotle for some grey-coloured waterside birds. The specific subminuta is from Latin sub, "near to" and minuta, "small" from its similarity to the little stint, Calidris minuta.

It breeds across northern Asia and is strongly migratory, wintering in south and south east Asia and Australasia. It occurs in western Europe only as a very rare vagrant.

This bird has yellowish legs and a short thin dark bill. Breeding adults are a rich brown with darker feather centres above and white underneath. They have a light line above the eye and a brown crown. In winter, Long-toed Stints are grey above. The juveniles are brightly patterned above with rufous colouration and white mantle stripes.

This bird can be difficult to distinguish from other similar tiny waders which are known collectively as "peeps" or "stints". In particular, Long-toed Stint is very similar to its North American counterpart, the least sandpiper. It differs from that species in its more slender, longer-necked appearance, longer toes, somewhat brighter colours, and weaker wingbar.

These birds forage on mudflats, picking up food by sight, sometimes by probing. They mainly eat small crustaceans, insects and snails. Little is known of the breeding habits of this species, although it nests on the ground, and the male has a display flight. 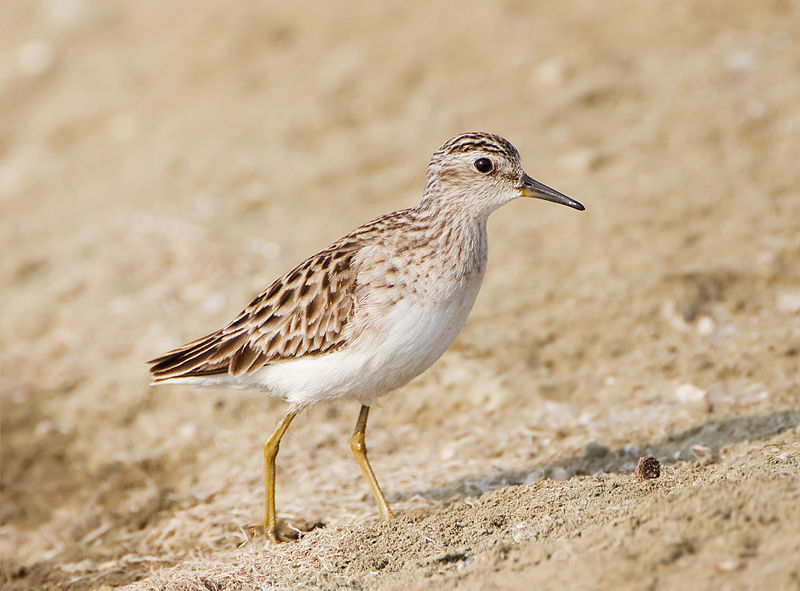