Barrow's goldeneye (Bucephala islandica) is a medium-sized sea duck of the genus Bucephala, the goldeneyes. This bird was named after Sir John Barrow. The genus name is derived from Ancient Greek boukephalos, "bullheaded", from bous, "bull " and kephale, "head", a reference to the bulbous head shape of the bufflehead. The species name islandica means Iceland.

Their breeding habitat consists of wooded lakes and ponds primarily in northwestern North America, but also in scattered locations in eastern Canada and Iceland. Females return to the same breeding sites year after year and also tend to use the same nesting sites. The males stay with their mate through the winter and defend their territory during the breeding season, then leave for the molting site. Mating pairs often stay intact even though the male and female are apart for long periods of time over the summer during molting times. The pair then reunites at wintering areas.

In Icelandic the bird is known as húsönd (house-duck); it is a common species of the Lake Mývatn in the north of the country.

They are migratory and most winter in protected coastal waters or open inland waters. Barrow's goldeneye, along with many other species of sea ducks, rely on urbanized, coastal estuaries as important places on their migration patterns. These estuaries provide excellent wintering and stopping places during the ducks' migration. It is an extremely rare vagrant to western Europe and to southern North America.

These diving birds forage underwater. They eat aquatic insects, crustaceans and pond vegetation. The main staples of the bird's diet are Gammarus oceanicus and Calliopus laeviusculus, which are both marine crustaceans. A large part of their diet consists of mussels and gastropods.

The Barrow's goldeneye is considered an arboreal bird species because much of its nesting is done in cavities found in mature trees. The birds will also nest in burrows or protected sites on the ground. Barrow's goldeneyes tend not to share habitat with the much more numerous common goldeneye. Barrow's goldeneye tend to be territorial towards other birds venturing into their domain. This is especially true among the drakes. Confrontations may occur in the form of fighting. Drakes often do a form of territorial display along the boundaries of their territory. This is both true on land and in the water. These territorial displays average about 6 minutes in length and often trigger other males to perform their own show.

Very little is known about the breeding sites and patterns of the Barrow's goldeneye. After the breeding season, the birds migrate to specific molting sites to undergo molting, the loss and regeneration of feathers which causes them to be flightless for anywhere from 20–40 days. These molting sites are often wetlands that are more drought resistant and plentiful in food, along with being less influenced by humans and predators.

The Barrow's goldeneye was greatly affected by the Exxon Valdez oil spill in 1989. The spill greatly impacted the bird's wintering areas, and numbers of the birds in these areas decreased after the spill. The birds' exposure to the oil spill mainly occurred in the shallow water mussel beds along the coast.

The Barrow's goldeneye is a relatively quiet bird that generally only makes vocalizations during the breeding season and courtship. These can include low volume squeaks, grunts and croaks. During flights, the fast movement of the bird's wings creates a low whistling sound. 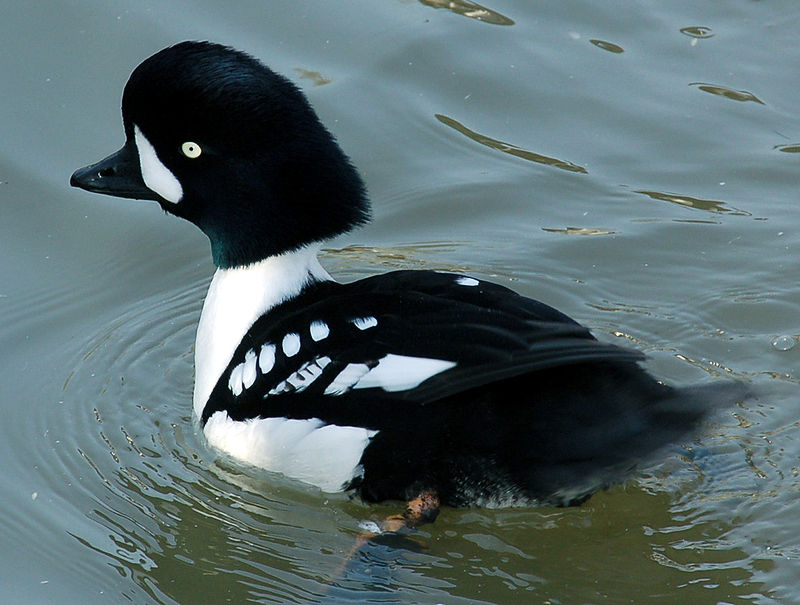