The greater scaup (Aythya marila), just scaup in Europe or, colloquially, "bluebill" in North America, is a mid-sized diving duck, larger than the closely related lesser scaup. It spends the summer months breeding in Alaska, northern Canada, Siberia, and the northernmost reaches of Europe. During the winter, it migrates south to the coasts of North America, Europe, and Japan.

Drake greater scaup are larger and have more rounded heads than the females; they have a bright blue bill and yellow eyes. Their heads are dark, with a green gloss; the breast is black, the belly white and the wing shows a white stripe. The females are mostly brown, again with white on the wing. They have dull blue bills and white on the face.

Greater scaup nest near water, typically on islands in northern lakes or on floating mats of vegetation. They begin breeding at age two, but start building nests in the first year. The drakes have a complex courtship, which takes place on the return migration to the summer breeding grounds and concludes with the formation of monogamous pairs. Females lay a clutch of six to nine olive-buff colored eggs. The eggs hatch in 24 to 28 days. The down-covered ducklings are able to follow their mother in her search for food immediately after hatching.

Greater scaup eat aquatic molluscs, plants, and insects, which they obtain by diving underwater. They form large groups, called "rafts", that can number in the thousands. Their main threat is human development, although they are preyed upon by owls, skunks, raccoons, foxes, coyotes, and humans. Greater scaup populations have been declining since the 1980s; however, they are still listed as a species of least concern on the IUCN Red List. 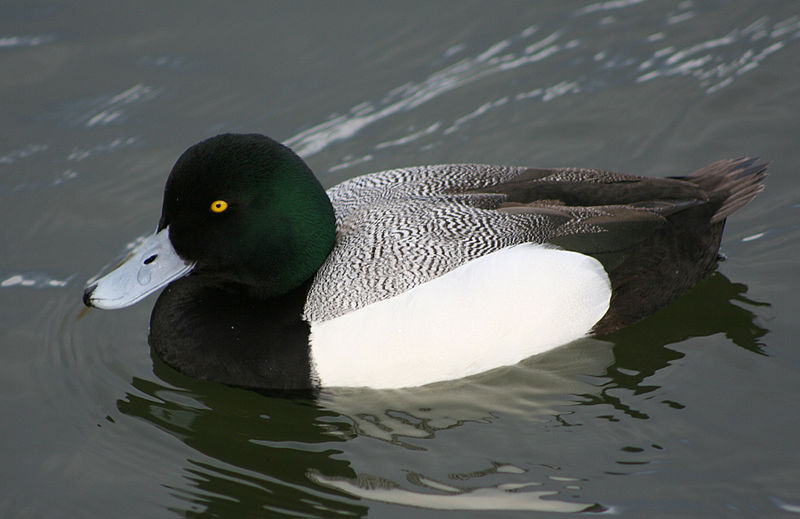