The little swift (Apus affinis), is a small bird, superficially similar to a barn swallow or house martin. It is, however, completely unrelated to those passerine species, since swifts are in the order Apodiformes. The resemblances between the groups are due to convergent evolution reflecting similar life styles. The former eastern race, house swift, is usually considered a separate species, Apus nipalensis.

These birds have very short legs which they use only for clinging to vertical surfaces. The genus name Apus is Latin for a swift, thought by the ancients to be a type of swallow with no feet (from Ancient Greek α, a, "without", and πούς, pous, "foot"). The Latin specific affinis means similar to or related to, but in this case the species that the little swift supposedly resembles is not clear from the description. They never settle voluntarily on the ground.

Little swifts breed around habitation and cliffs from southern Spain,Africa northeastwards through southern Pakistan and India and Sri Lanka. Unlike the more northerly common swift, many birds are resident, but some populations are migratory, and winter further south than their breeding areas. They wander widely on migration, and are seen as rare vagrants in much of Europe and Asia.

Little swifts build their nests in hole in buildings or sometimes on cliffs, laying 1-4 eggs. A swift will return to the same site year after year, rebuilding its nest when necessary. A species of bedbug Cimex hemipterus has been recorded from its nest in India.

Little swifts spend most of their lives in the air, living on the insects they catch in their beaks. They drink on the wing, but roost on vertical cliffs or walls. Little swifts are readily identified by their small size. Their wingspan is 33 cm compared to the 42 cm of common swift. They are black except for a white rump, the white extending on to the flanks. They have a short square tail. The flight is fluttering like a house martin.

The call is a high twittering. 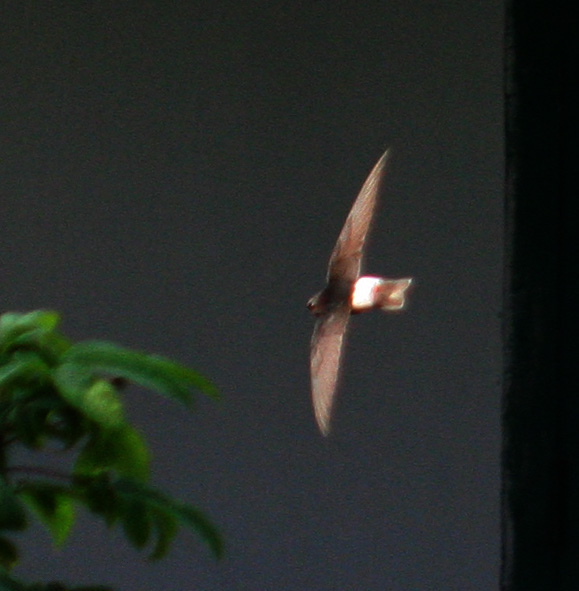