The clamorous reed warbler (Acrocephalus stentoreus) is an Old World warbler in the genus Acrocephalus. It breeds from Egypt eastwards through Pakistan, Afghanistan and northernmost India to south China, southeast Asia and south to Australia. There is also an endemic race in Sri Lanka.

Most populations are sedentary, but the breeding birds in Pakistan, Afghanistan and north India are migratory, wintering in peninsular India and Sri Lanka.

This passerine bird is a species found in large reed beds, often with some bushes. 3-6 eggs are laid in a basket nest in reeds.

Clamorous reed warbler is a large song thrush-sized warbler at 18–20 cm. The adult has an unstreaked brown back and whitish underparts. The forehead is flattened, and the bill is strong and pointed. The sexes are identical, as with most warblers. It is very like great reed warbler, but that species has richer coloured underparts.

There are a number of races differing in plumage shades. The migratory northern race has the richest brown upperparts, and the endemic Sri Lanka subspecies is the darkest form.

Like most warblers, clamorous reed warbler is insectivorous, but will take other small prey items.

The song is loud and far carrying, but less raucous than great reed warbler. It is a slow, chattering kereet-kereet-kereet with typically acrocephaline whistles and mimicry added. 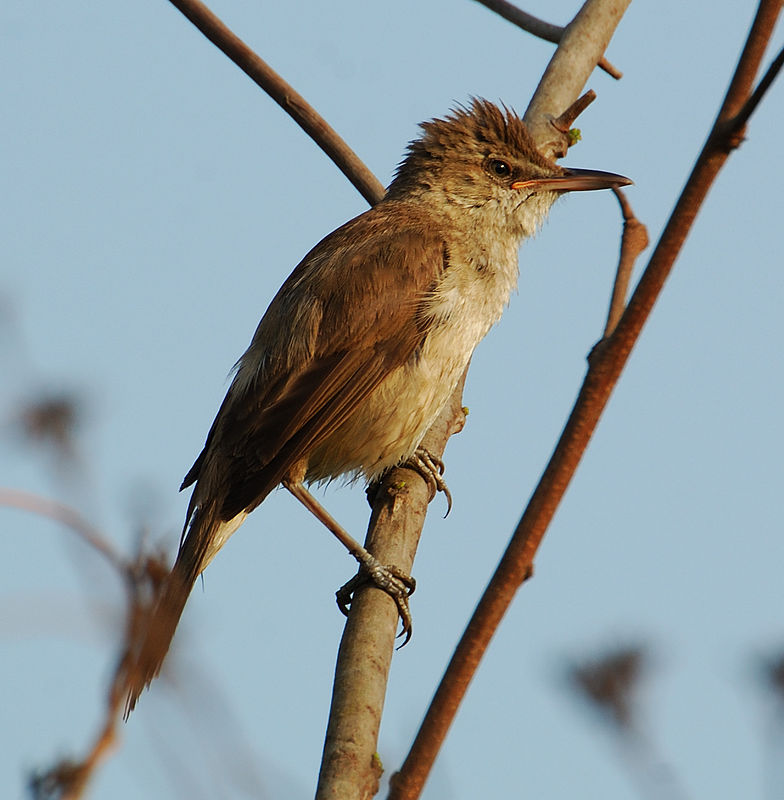